Skip to content
Today, I finished my submissions for Course 4
Week 4: Graphic Design Radicalism:
Design practice in the late 1950s to early 1970s was new, radical and divergent. To show you just how varied it was, we’ll look at the work of four key players/movements.
We were asked to identify a subculture in design “established” since 1990 and write a short paragraph (or couple paragraphs) answering a few questions.
Here’s what I wrote on a subculture called “Emo”
1. Wikipedia defines Emo as a musical style: “Emo /ˈiːmoʊ/ is a genre of rock music characterized by an emphasis on emotional expression, sometimes through confessional lyrics. It emerged as a style of post-hardcore from the mid-1980s hardcore punkmovement in Washington, D.C., where it was known as emotional hardcore or emocore.” Which it is of course. But it is also a visual art form/subculture. These 2 forms of art are similarly defined. Which is handy.
The musical thrust of Emo as a subculture seems to have come-before-the-visual
subculture. Emo describes aspects of fashion, culture and behavior. The emo
subculture has been associated with fans in skinny jeans; tight, usually short-sleeved t-shirts (often with the names of emo bands), studded belts and flat, straight, jet-black hair with long bangs. Emo has been associated with a stereotype of emotion, sensitivity, shyness, introversion and angst and similar.
As a musical form, emo is an evolution of punk-rock and indie-rock styles.  When this style
musically began is arguable. Wikipedia says the Beach Boys’ “Pet Sounds” was
one of, if not the first; in the mid-1960s. Every new idea has to start somewhere. However, Wikipedia also says that in 1991-1994 – the movement was reinvented, at least musically.
2. Upon a shallow review of pinterest art from the search “emo art”, one can see some definite commonalities. An overall darkness, little color, but a lot of value range. Eyes are often depicted “sad” or giving a melancholy sensitivity. Along with this, often skulls and other “dead” icons
are associated. These works can easily be created by hand with ink/paper and/or by using an application on a computer.  Fonts can be characterized with a “hand-done” lettering style. This allows the viewer to remain in the space completely consumed by the emotion conveyance.
In a 2009 article; Jonathan Jones wrote: “In judging this year’s Turner prize, I may just have discovered the century’s first new art movement – emotional minimalism, or emo art”. https://www.theguardian.com/artanddesign/jonathanjonesblog/2009/dec/22/new-art-movement-saatchi-turner-prize
Seemingly, among the more famous Emo visual artists is Tim Burton. Many of his animated movies are depicted with a decidedly “Emo” flair.  Characters from “Edward Scissorhands” to “The Corpse Bride” have a distinctive and Emo characteristic.
3. For some this may feel like an extension of the “Goth” subculture: however, goth
relying more on dark themes and non-conformist emphasis than strictest emotional conveyance. The emotional perspective may be summed up: EMO: hate themselves; GOTH: hate the world. https://www.diffen.com/difference/Emo_vs_Goth
The image is saved by “Joanne Alisa Bernardo” from Pinterest. I do not know if she is the original artist (https://i.pinimg.com/originals/9e/f3/e0/9ef3e0df53c45c7be1cbba6c76e19b66.jpg)
The viewer can see here a typical and powerful image using the emo style: the figure is think and spare; The halo and wings offer an angelic or celestial aspect. However, the wings are black and bat-like; not typical angel. The face has only hair and one eye, that is appearing to cry. The shirt has a splatter across the chest, and this has the only color, blood red. The figure is
standing on a skull also with an eye that appears to be tearing. This is not a happy image, there is a bit of wonder for the apparent pain or angst in the image. The image appears to not “hate the world” as it doesn’t have an anger component nor a storming-feel against the world/crowds. It seems to be self-contained angst. 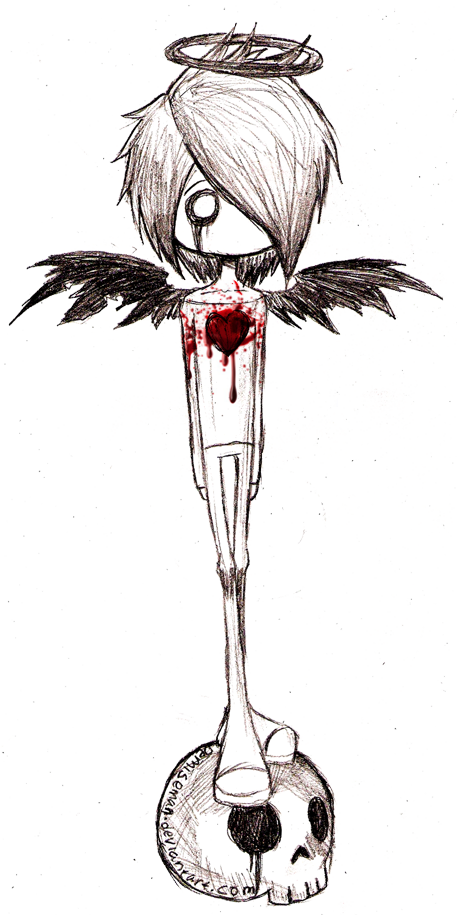 So, what subcultures in art do you know about? I admit I’m pretty limited and even more so to the Americas. Add to the conversation below.
Do you think studying artistic subcultures can make one a better or more creative artist?